In the mid 1970’s, when I was starting to get involved in the Chicago blues scene, I was aware of Lonnie Brooks, and had seen him once or twice. I recall watching him play at Mac Simmons club at 23rd and Michigan.
He had made a decision to focus more on blues after being part of a successful European tour in 1975, and In the Spring of 1976, I got an opportunity to play with him. At the time, I was sharing a rehearsal space on Ashland Avenue with some other musicians, and I met him there, along with his friend Phil Lowman.
We sat down and played something, a shuffle, a slow blues, I don’t recall. (This was a lot like what had happened a couple of years earlier at my Chicago Federation of Musicians audition. I pulled out the guitar, the guy said “Play me a fast one and a slow one.” I strummed a few blues chords, and he said, “That’s enough, you passed.”) After we played for a minute or two, Lonnie looked at Phil and said, “Well, he can play the blues.”  I was in.

There was no rehearsal. My first gig with him was on June 5, 1976, at the Show and Tell Lounge on Lake Street. Our first road gig was the Howard Street Tap in Omaha, Nebraska. The transportation was Phil Lowman’s Cadillac pulling a trailer with the equipment.

It wasn’t a really strong  band. But the band I had been playing Lincoln Avenue clubs with had come to an end, and I recruited some of them to come along. Our next road trip was to Ottawa, Canada, and Lonnie procured the old blue Dodge van that would be our road vehicle for the next few years. (One time when I was moving, the two of us moved me in that van.) We played various places around town, Biddy Mulligans, the Wise Fools Pub, and places like The Gallery, a corner bar on Lawrence Avenue in Albany Park. One particularly bizarre place was the Zorba Disco in Berwyn. It was run by some tough gangster types, and cars were routinely broken into outside. The joint was deserted for most of the night, but around 1 or 2 AM, there was an influx of strange humanity, hookers, transvestites, and so on. I recall that being the first place I saw drummer Casey Jones, who playing with Eddy Clearwater. Sometimes we did  parties. We were playing a party in a friends living room in Des Plaines once, and the police finally came and shut us down. Our road trips were usually to Nebraska, the Zoo Bar in Lincoln, or Howard Street Tap in Omaha.

We kept at it, and we got better. We covered a lot of the usual stuff, and Lonnie was writing songs and working on new twists to old ones. But he had a family to support, and he had to take a job, in a die casting plant. I recall one time when I went there to get paid for a recent gig. I waited in the parking lot, and when he came walking out, he was in work overalls, wearing a hard hat; covered in grime from head to toe. And grinning from ear to ear, just happy to see me. Funny, the moments that stay with you.

Some of  the songs that Lonnie was writing were a little bit derivative.  But even the takeoffs on older blues songs had things like alternative sounding chord progressions and turnarounds, which were some of his trademarks. And he was coming up with more lyrics. On one song, he tapped into his job, singing, “I work in a die casting plant, pouring hot metal like a fool.”

Lonnie had cut records as Guitar Junior before coming to Chicago, and there were people who were aware of him, interested. And we finally got a chance to record in 1977, on a blues series produced by Ralph Bass. It was a quick session, done in 2 hours with mostly single takes. We recorded six originals, and two covers. One was Freddie King’s Hideaway, complete with a stumble that Mr. Bass would not let us retake. He said he wanted that immediate sound, “like the old days.”  The other cover was of Lowell Fulsom’s Reconsider Baby, but with a reworked chord progression. It has always been one of my favorites. But it was not released until Delmark put it out in 1993. In retrospect, it’s a good session, and an enjoyable listen. It means a great deal to me, being my first recording session. For a really good take on this session, check out Dick Shurman’s liner notes on the Delmark release, Let’s Talk It Over, (Delmark DD-660).

A year later, the opportunity came to record four tracks for Alligator. Actually, we did five tracks, and four made the album, part of an anthology called Living Chicago Blues. They were great recordings, got a Grammy nomination, and led to the full LP Bayou Lightning. We always seemed to have an ongoing drummer crisis, and we had to deal with that at the last minute for the anthology. Casey Jones was brought in, and his drumming on both of those first Alligator sessions helped to make them very strong outings. Mostly, though, they show Lonnie upping his game, increasing his creativity. While those sessions were also mostly originals, with a few covers, even the covers could be totally different from the original. Listen to Don’t Answer the Door, on the anthology, or I Ain’t Superstitious, on Bayou Lightning. These recordings led to a string of releases over the years for Lonnie, who deservedly became a popular blues star.

It’s because he had an imagination. If he found himself on a train in Europe, his mind would invariably turn to thoughts of murder mystery.

We started doing more road trips as well, and we finally wore out the poor old blue Dodge van. It was replaced with a nicer brown one. In both of these vehicles, we would arrange the gear in such a way that one person could rest on an air mattress in the rear, on top of speaker cabinets. Probably a stupid and dangerous arrangement, but it was crowded with two guys up front and three on the bench seat, and after all, we were young and immortal.

Some of the great local gigs at the time were four-nighters at both the Wise Fools Pub and Biddy Mulligan’s. Chicagofest was an amazing affair, held on Navy Pier before it was developed into what it is today. The stage was set up in front of the warehouses that lined the pier, and huge bleachers set up to view the performers. The blues stage was incredibly popular. In 1980, we recorded live there, and the result was a six song album titled Blues Deluxe. We were included on the LP with Mighty Joe Young, Koko Taylor, Muddy Waters, Willie Dixon, and Son Seals. When Sweet Home Chicago was chosen to be our contribution, we wondered why none of our original stuff made the cut. But that version of the song turned out to be extremely popular, the recording received a Grammy nomination, and I’m as proud of it as anything we did. I got to record one more LP with that band, the Alligator release Turn On The Night.

We were very much like a family, and like any family, we had our disagreements. Lonnie was in his 40’s, and still trying to form his career. We sidemen started in our 20’s, and we turned 30 in that band. We thought we knew so much then, but we did not entirely appreciate what we had. Years later, all of us, including Lonnie, understood what a great band and great times we had had. By the middle of 1982, I had departed, but I wish I had stayed a little longer. And I wish I had been a little smarter. Those were some of the best times of my life, and probably the most important period of my career. I think about it often, and I’m sure I always will. 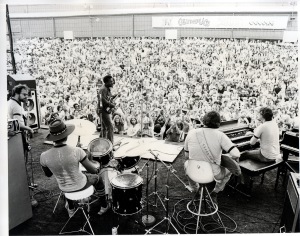